Reflections on the Process 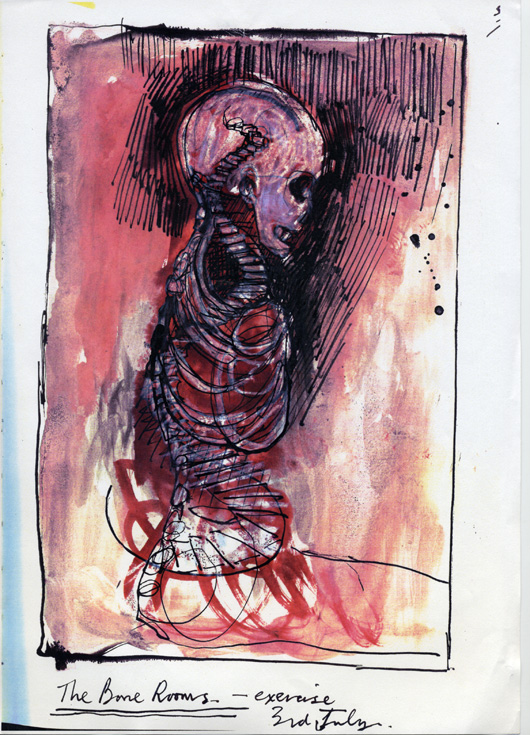 It’s a skin-flayingly, gloriously organic thing: playwrighting. It is the word-based skill which relies least on ink and paper to manifest, in the long run.

The biological/organic metaphors which have obsessed all my original (and even adapted) pieces of performance have always intrigued and inspired me, both in the matter of form and content; in fact: in the matter of Matter.

A gut compulsion has always led me away from Aristotle’s straight lines and the sanctity of telling a story as conceived by our culture – a culture which has been pretty firmly locked against the organic intelligence of mind/body. All my plays have been, (to borrow a phrase from Charlotte Bronte) very Strange Ones.

There is a particular nature to my crafting of work for performance which articulates the relationship between space, the physical world and the human body. This instinct quickly led me out of theatres and into cross-art form, site specific, collaborative work; where the interface of words, space, pictures and performance could all influence each other during the process of 4-D play-making (real time being a thrilling aspect of live performance).

My first breakthrough into the possibility of new dramaturgical forms happened in 2003 with Sweet Fanny Adams in Eden (SAC/ACE funded, performed in the Plant Collectors’ Garden in Pitlochry, and on the World Wide Web in 2006).

This piece was composed with Leo Warner and Robert Sharp of Fifty Nine Productions (now National Theatre Video Associates) using modular hypertext for simultaneous multi-script performance in a garden, which included video-only scenes. I found that use of technology, both directly and through the metaphors and hypertext structures, influenced and liberated every aspect of the piece I was composing as much as the biological/architectural imperatives of the garden.

Working informally with performance students and in workshop conditions I am beginning to discover that, in the spirit of bricolage, I work with what is in the space; its personality, the nature of the play idea, the physical and vocal languages of performers and my own physical, thematic and poetic preoccupations. The text I then compose seems to embody a sense of four-dimensional structure, creating gaps which require the physical and vocal to be restored in real time and space, before its inherent form unfolds.

These fleeting moments of grace and insight, often put aside (by myself as much as others) and sometimes suffocated by commercial requirements and conservative assumptions, can be profitably foregrounded now, developed, and fed into the broader theories, teaching and practice of playwrighting and performance at my host university.

Placing my career and current projects as the terrain of my research, I am seeking practical environments and new notations that can finally express its inherent nature.

Poster design for The Bone Room by Olivia Gill

Established in 2003 by playwright Judith Adams, artist / photographer Simon Warner and Leo Warner, creative director of 59 Productions, Whitestone Arts produces and facilitates creative, cross-media projects. At our base in the West Yorkshire Pennines we develop new collaborative work, supporting emerging artists as well as running and hosting workshops on landscape, art, dance and text.  We also have residential and training facilities available for hire in our converted farmhouse buildings.